Disclosure: I was not paid or compensated in any way by anything or anyone mentioned in this post. All opinions and thoughts are my own and may not reflect other people’s thoughts and experiences.

So, I had posted about the day before the most incredible day here. In this post I explained how I learned about the Quilotoa Loop in Ecuador and how I had met a group of Brits that had done a hike from the Quilotoa Crater to Chugchilan in Ecuador. With their recommendation, I decided to give the hike a try and it turned out to be the most incredible day of my life. Here’s the story of that day….

The owner at the Black Sheep Inn  set up my transportation up to the Quilotoa Crater and provided me with a map with instructions on how to hike back to the Inn in Chugchilan. The instructions had directions like ‘you will see two eucalyptus trees, turn left at the eucalyptus trees.’

That morning my transportation picked me up early. The owner of the Inn had arranged a bagged lunch for me – a cheese sandwich and some popcorn. I would be riding on the back of a pickup truck with a German girl who was staying at a different guesthouse, she was supposed to be my companion during the trek back, or so thought the owner of the Inn who I feel was concerned about me doing the hike back alone.  We had to pay about $12 for what I think was about a 45 minute drive up winding roads to the crater. The German girl was unaware of this payment (for some reason) so she asked to borrow the money from me which she would pay back after the hike. I kind of had no choice, we were on the back of this pickup truck on our way to the crater.

It was a really amazing drive up to the crater. The mountains were in full glory as the sun was rising. I wish I had photos but I think I was so in the moment during that drive up that I just soaked it in.

We were dropped off at a very small touristy area where there was a viewpoint. I was happy to have the German girl with me because I would have someone with me to take photos of me! This was the only photo I’d have taken by her and soon you’ll know why.

As you can see the crater is beautiful. I would be hiking around the rim of the crater to the far end that you can see in this photo. Then I’d go down to the valley, through a small village and up and down a several canyons to get back to the Inn.

Now, the Quilotoa Crater is 3,914 m above sea level. That’s 12,841 feet high. I had been in Ecuador for less than a week at this point and had already encountered some difficulties with the elevation during my stay in Quito which is 2,850 m high. If any of you have experienced elevation sickness, it’s no joke. I was feeling OK at this moment but I could not move fast because it was hard to breath. My plan was slow and steady, the German girl was the hare in this case. She disappeared and I never saw her again  during my hike back. You’ll learn about what happened to the German girl later on.

I continued around the rim of the crater, taking photos like this one along the way. Here’s where I was on the rim, I believe the furthest mountain in the photo below was where I was heading. 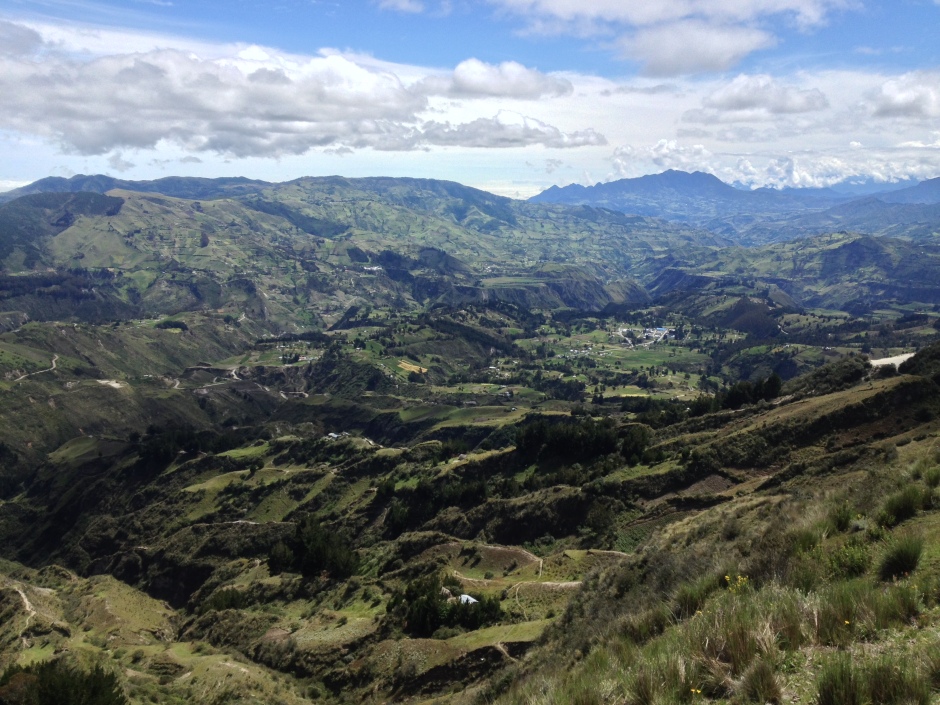 I began to realize that I would be doing this on my own (at this point in my life I had never done a trek like this before and I sure as hell had never done anything like this alone). I landed at this spot where I literally dropped to my knees and started bawling. I can’t even explain why I was overcome by so much emotion but let’s just consider the circumstances (some of which were introduced in the aforementioned post): I had decided to backpack Ecuador and travel because of a breakup, I had lost my job, I had not seen anything so beautiful, there was no one around NO ONE – I was alone in this beautiful spot; me and God and I also had the realization that I was really going to have to hike this thing back alone because the German girl disappeared. Below is a photo of the spot and let me tell you, the photo doesn’t do the beauty any justice.

Recovering from my tears I remember thinking ‘we are all ants,’ I remember feeling so small while looking at everything around me, and I thought that was a beautiful feeling. Being emotionally overwhelmed, I reached into my backpack, grabbed my notebook and wrote the following messy note during my moment of clarity:

Now, I’m writing this 2 years after the fact and that’s all a little too deep for me right now so let me continue telling you the story of the rest of the hike in pictures…

This is me taking a selfie and getting myself together after crying like a baby. 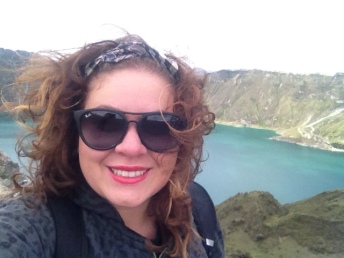 I had lunch at a bench at the ridge of a canyon before heading down it.

I met some adorable curious girls who I offered some popcorn. One of the girls took the whole bag. I think they were hungry. 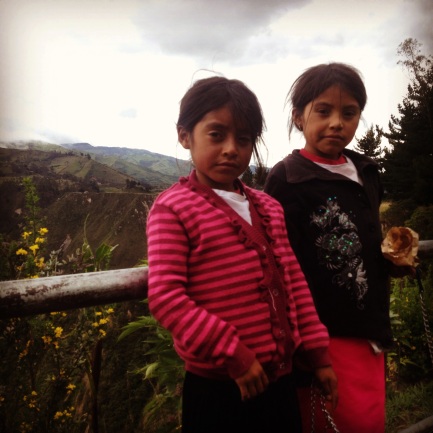 This was the house the girls lived in. 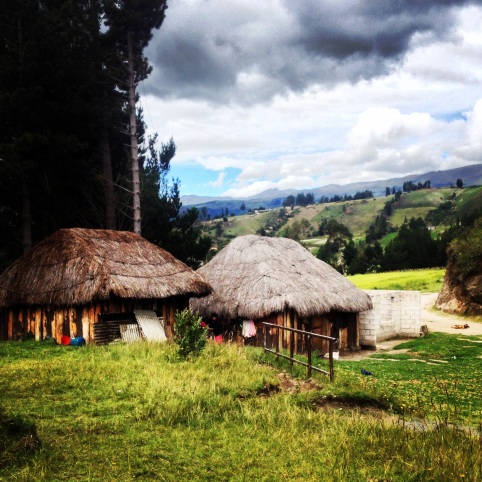 At the bottom of that canyon, after a bit more trekking I came across this stick bridge I had to cross. On the other side of the stick bridge was pure dirt – that I had to climb up. The dirt crumbled below me with every step. This was by far the most difficult and frustrating point of the hike. I was probably climbing up the dirt for close to 90 minutes.

But I made it up and shortly realized that I had more uphill climbing to do. When I took the photo below I was slightly delirious but thought it was hilarious that I had to get to the top of those rocks behind me. I was tired but proud of myself already for having gotten as far as I had gotten at this point. 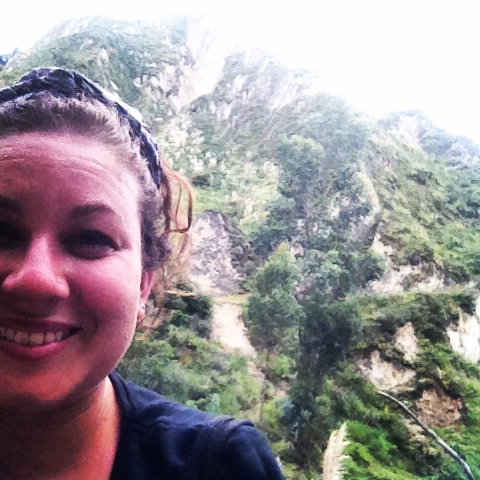 There were wild horses on the trek. Or maybe they belonged to someone although there weren’t any people or houses around.

And finally more climbing before arriving at Chugchilan. 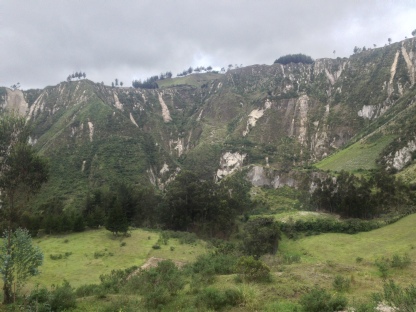 When I got to Chugchilan I stopped by the German girl’s Inn. Umm, she owed me $12 which, goes a long way in Ecuador – I wasn’t going to let that slide. She said she got lost (I was the one with the map). She had gotten a ride back into town. I collected my money and made my way back to the Inn.

I had a nice vegetarian dinner with the owner and some new guests, A father and son who I told about the hike. They decided they would give it a try the next day.

The owner set my attic room with a small heater and a candle to keep me cozy. It was the perfect ending to my day. 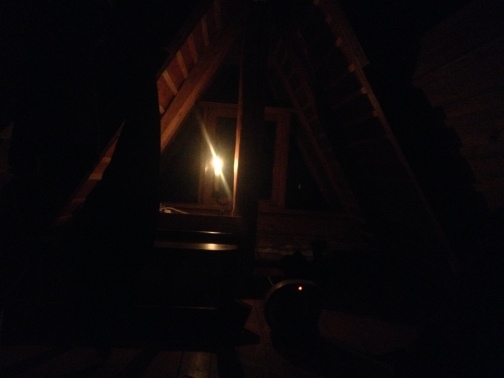 It took me over 6 hours to get to Chugchilan from the crater and it was seriously the most amazing and empowering experience that I really needed at the point in my life. It was the perfect remedy to my distress and I was able to move on with my life after that experience.  Travel heals and despite all of the ugliness in this world, it really is a beautiful place if we just open our eyes. I developed my love for hiking during this hike and I would highly recommend this course to anyone visiting Ecuador. I promise it will be worth it.

For more information on the Black Sheep Inn and the Quilotoa Crater hike visit www.blacksheepinn.com

iThere are no comments

Begin typing your search above and press return to search. Press Esc to cancel.